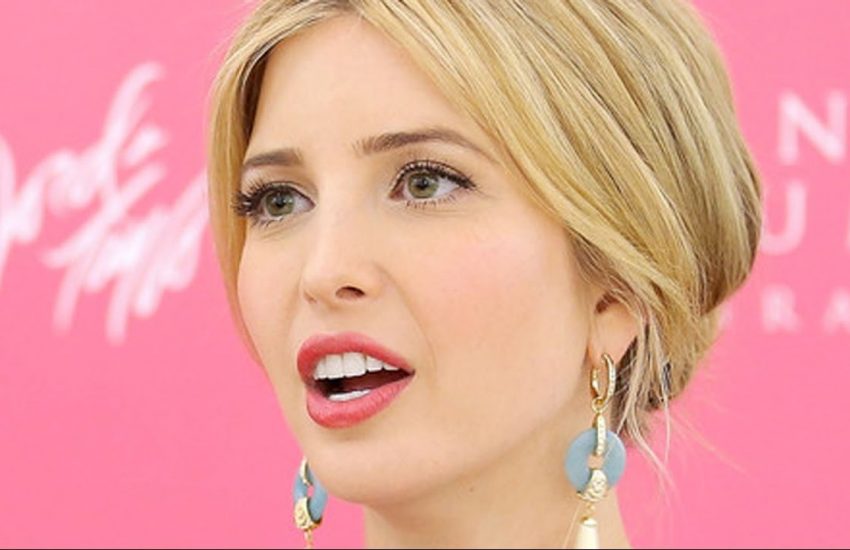 Has one of the most beautiful women in America, who’s also the daughter of the nation’s President, taken the aid of plastic surgery to look the part? Ivanka Trump has been constantly under media attention with rumors swirling that the celebrity has gone under the knife at least once or more. Let us find out if the claims are true!

Born into the powerful & wealthy Trump family, Ivanka was no stranger to limelight growing up under the shadow of the famous businessman, Donald Trump. But apart from her father’s legacy, Ivanka holds her own weight starting off as a model, and becoming a fashion designer, to starting her own line of fashion, being a mother of three, and finally rising as a successful entrepreneur.

However, being under the media glare since a young age has also subjected Ivanka to public scrutiny with many speculating that the celebrity has opted for cosmetic surgeries to enhance her good looks.

From Ivanka Trump teeth to Ivanka Trump’s boobs, there have been nearly thousands of such online searches carried out by her fans worldwide, wanting to find out which of her features are cosmetically enhanced?

Let’s take a detailed look and make an educated guess as to which of these rumors are actually true, shall we?

Before contemplating if Ivanka had gone through cosmetic surgeries, it is only fair to see through the celebrity’s biography to see on how she has changed over the years. 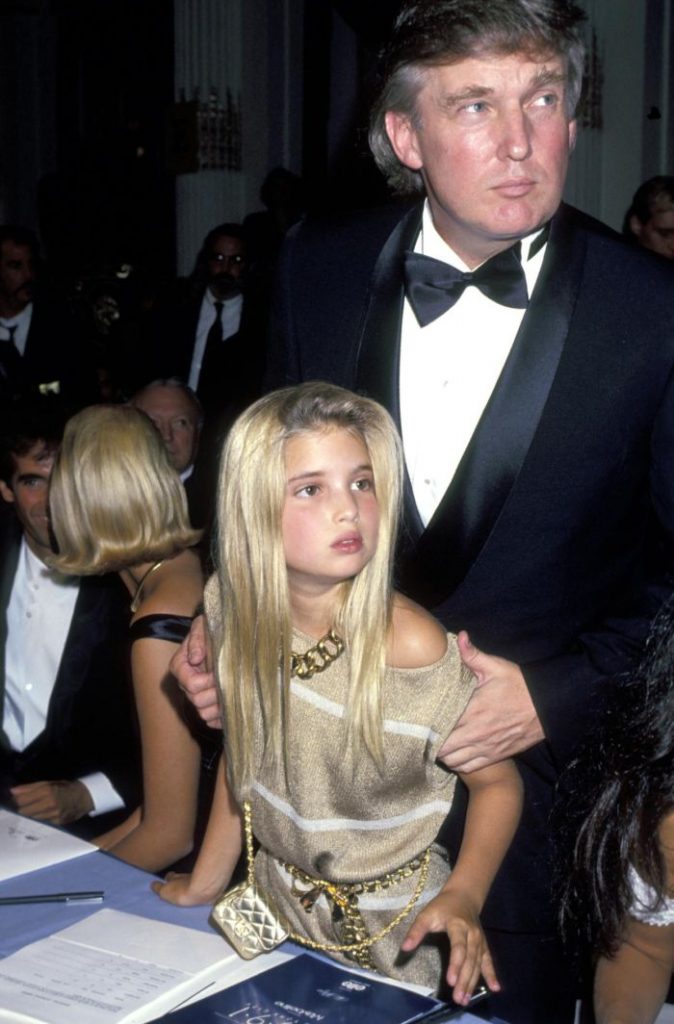 Born to Ivana Marie Trump, Donald Trump’s first wife, Ivanka is quite the celebrity in the US (and dare we say, the world over) with her great personality, her successful career and last but not least, her amazing looks.

With her parents divorcing when she was 10, Donald Trump has raised her to be the accomplished woman we see today. In the picture above, her blonde locks, plumps lips, large eyes, and adorable cheeks strike as admirable traits. Even as a kid, Ivanka Trump seems to have a good hold of fashion sense and style!! 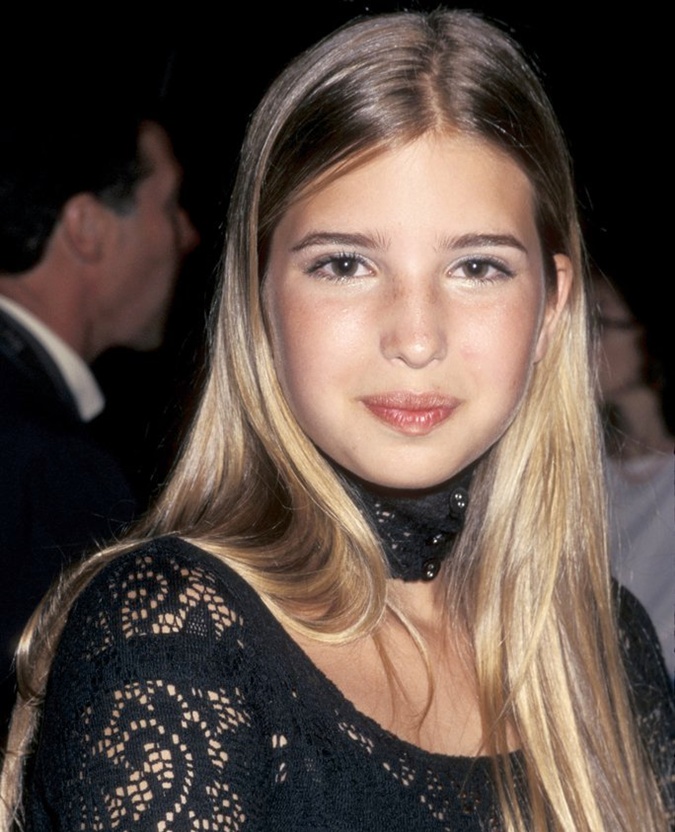 Here we see Ivanka at Trump Tower celebrating her father’s birthday; and at a tender age of 15. 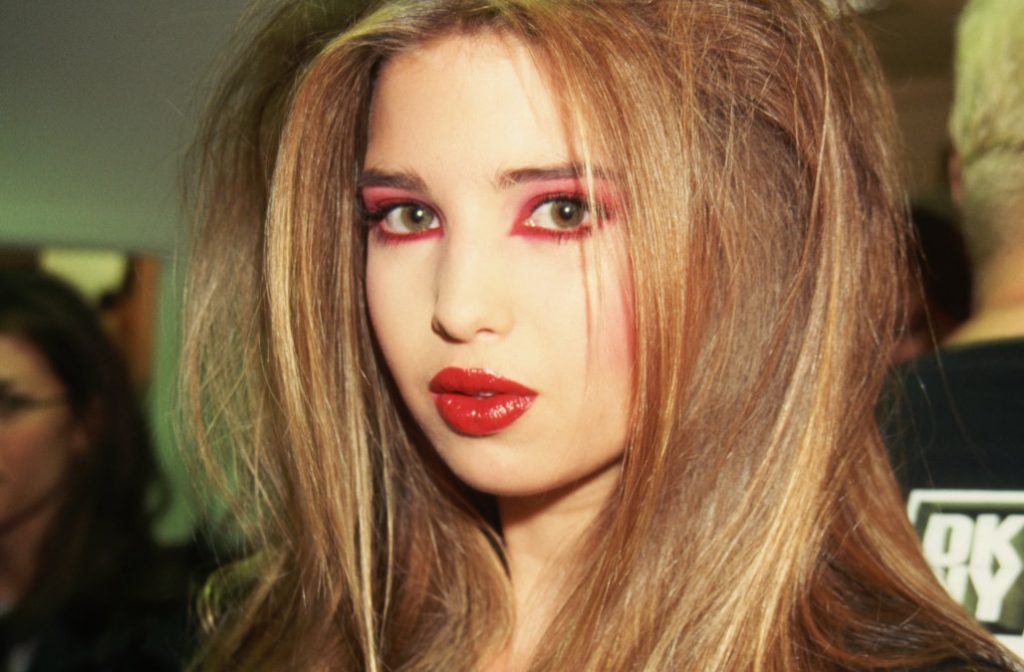 She seems to have also developed a knack for perfect makeup. We guess some people are just lucky enough to be born with such traits! 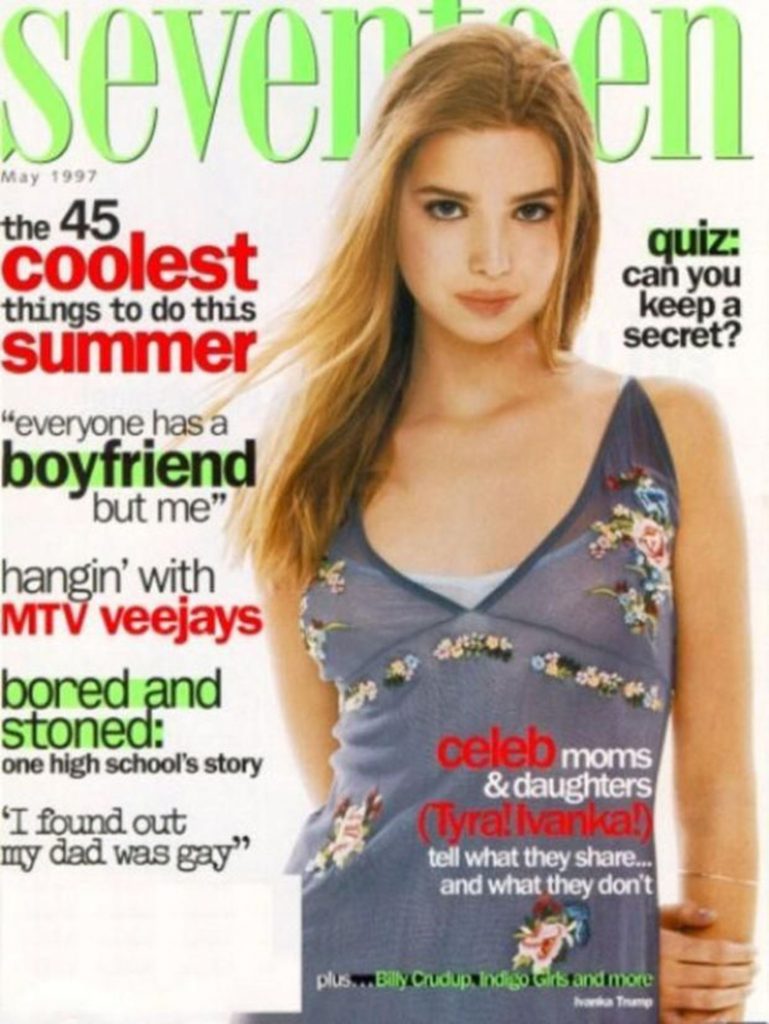 Studying at a boarding school in Connecticut, she got into modeling working during holidays and weekends. Here is the picture of Ivanka making it to the of “Seventeen” magazine’s front cover in 1997. 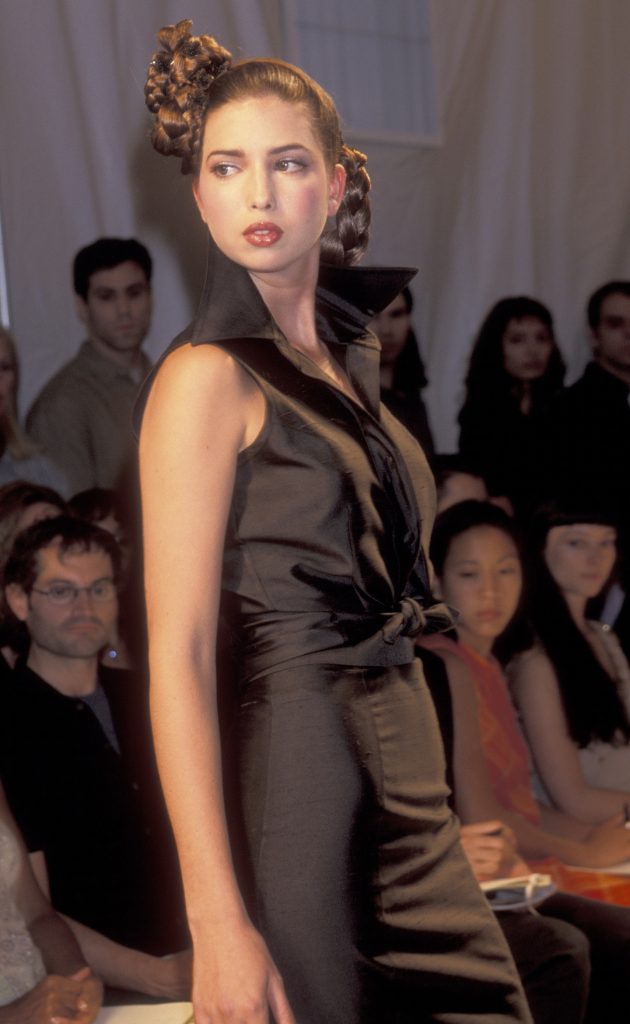 Working for many fashion brands and posing as a runway model for Thierry Mugler and Versace, Ivanka Trump had grown into a beautiful young lady at age 18.

We see her on the ramps of a Paris Fashion Show looking as stylish as ever. However, some people felt that her puffy face and her personality were not in line with the industry. 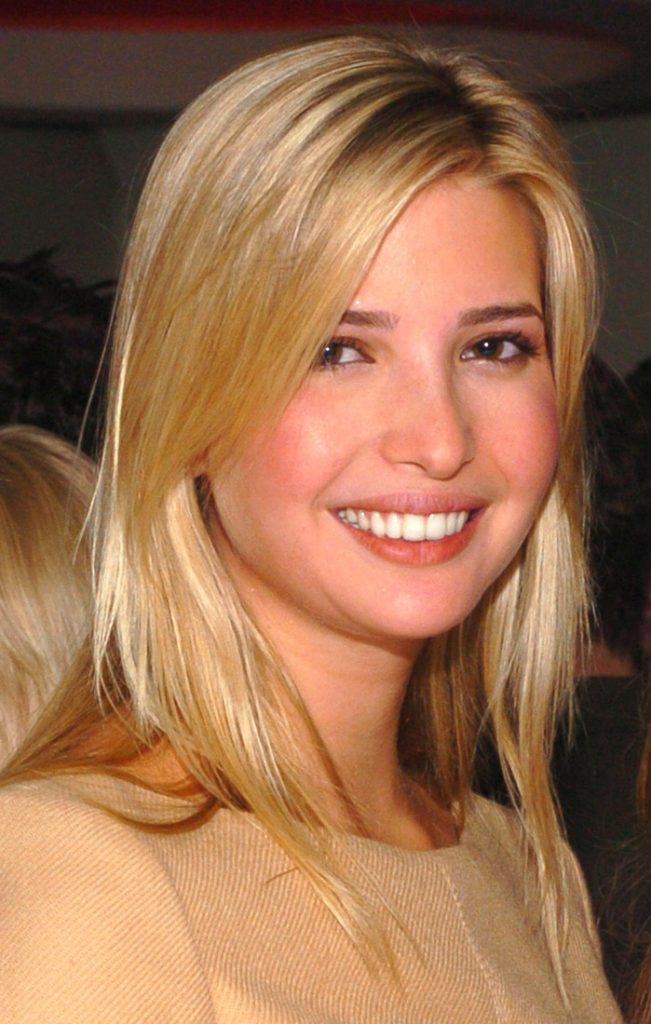 Even with a slim and fit body, Ivanka has always had a chubby face which never seemed to go away. Her pear-shaped face was becoming a very distinct characteristic trait. But her full plump lips definitely complimented her overall facial anatomy. 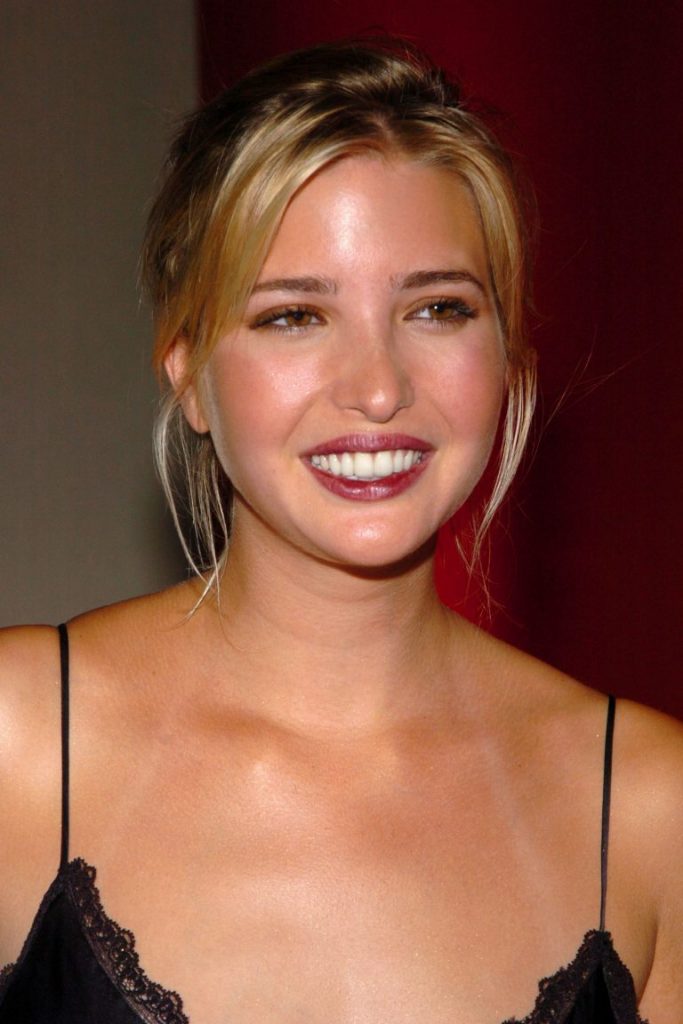 It was this year that her cheeks seem to have transformed attaining a slim jawline and a prominent chin, sparking rumors that the celebrity had undergone a buccal fat reduction surgery. 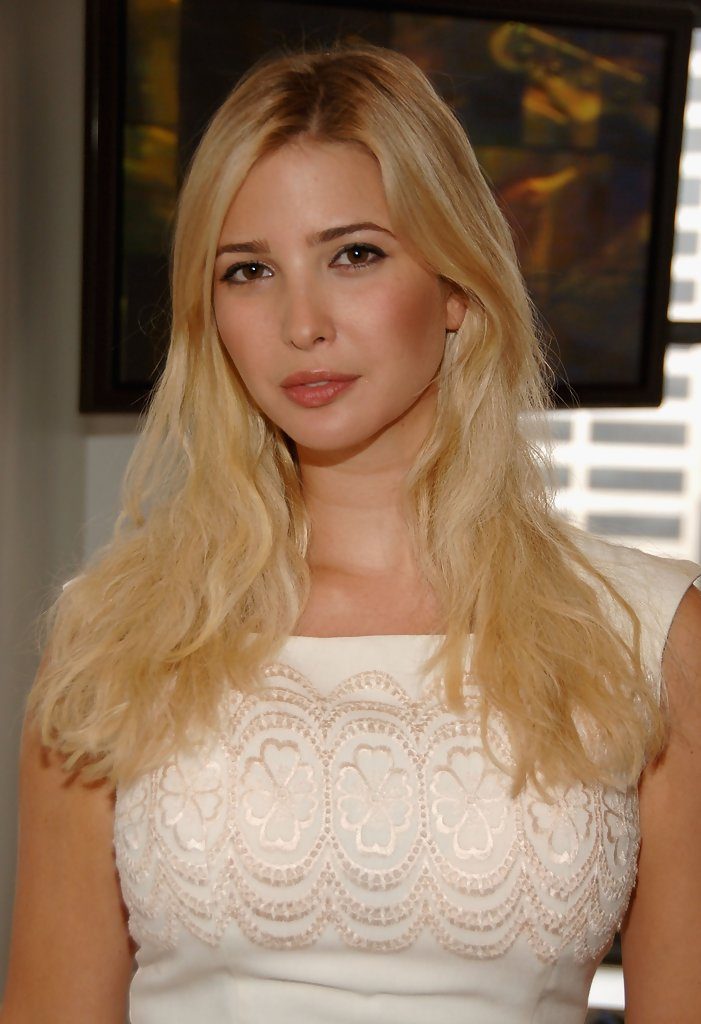 We suspect that Ivanka may have also had a nose surgery to transform her nose somewhere in the past 2 or 3 years. Notice how her bridge appears to be thin and narrow?!?

Graduating from the University of Pennsylvania at Wharton School, Ivanka then went on to pursue higher education earning an Economics degree. A Beauty with Brains!! 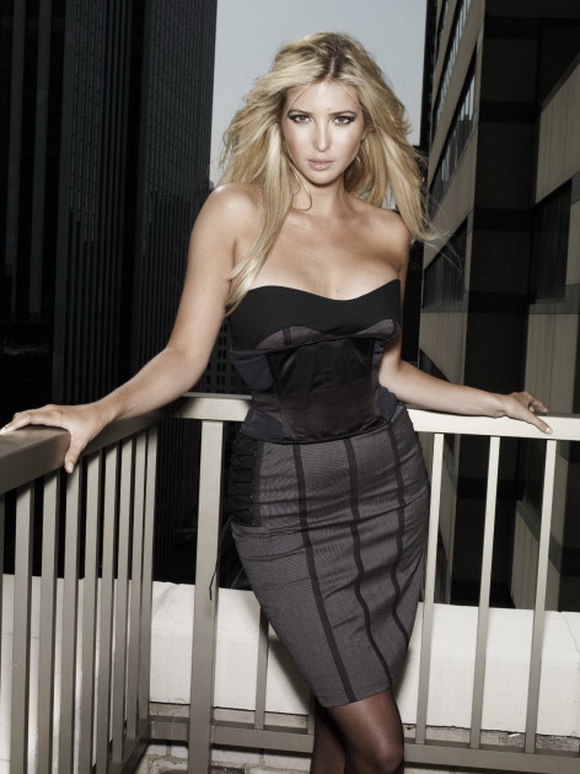 Appearing in the auction of photographer Francesco Scavullo’s work in New York, Ivanka was pictured sporting curled hair and an interesting outfit. At 25, her breasts seem to have grown naturally and appear to be medium-sized. 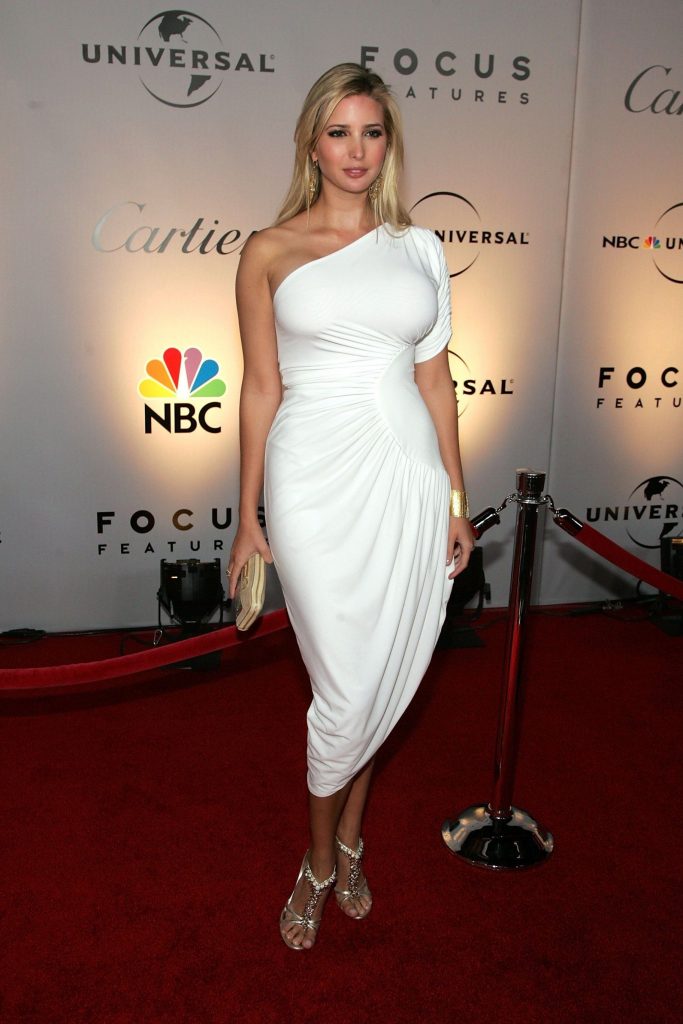 Making a bomb of an appearance at the Golden Globes After Party held in Beverly Hills, California, Ivanka surprised many with her one-shoulder white dress. 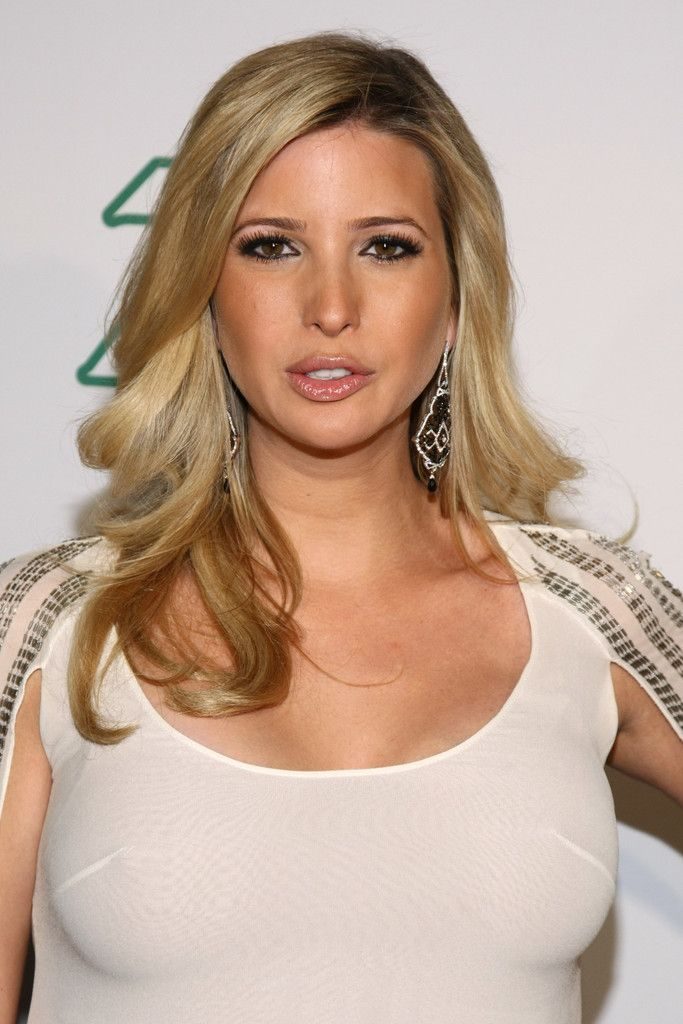 Here we see Ivanka Trump breast size to have grown prominently in just a year, thereby running the rumor mills wild that the celebrity had gone under the knife to have enlarged breasts. 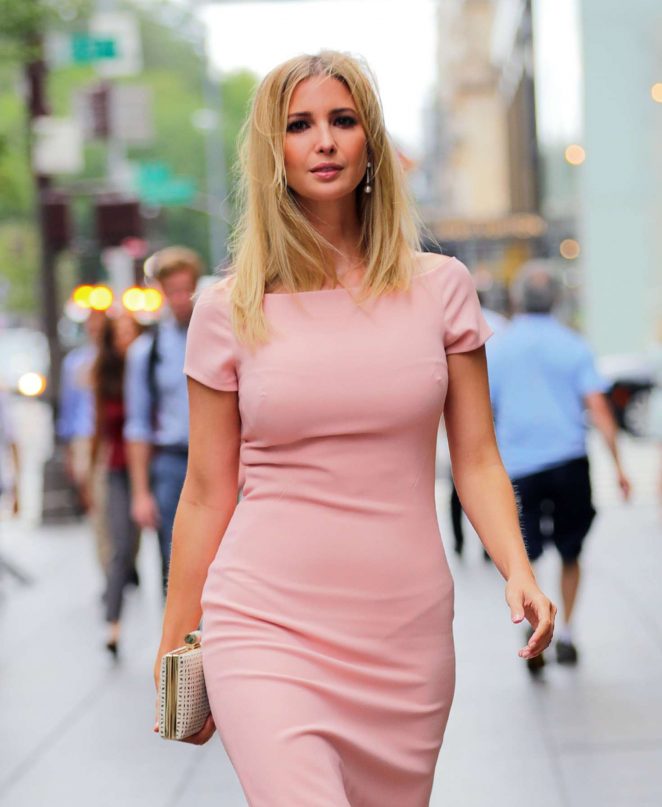 Ivanka boobs aside, we must mention that this simple dress accentuated her curves to its fullest and yet remained classy!

Ivanka Trump married her real-estate developer boyfriend, Jared Kushner, in a traditional Jewish ceremony. And who doesn’t want to look perfect at their wedding? 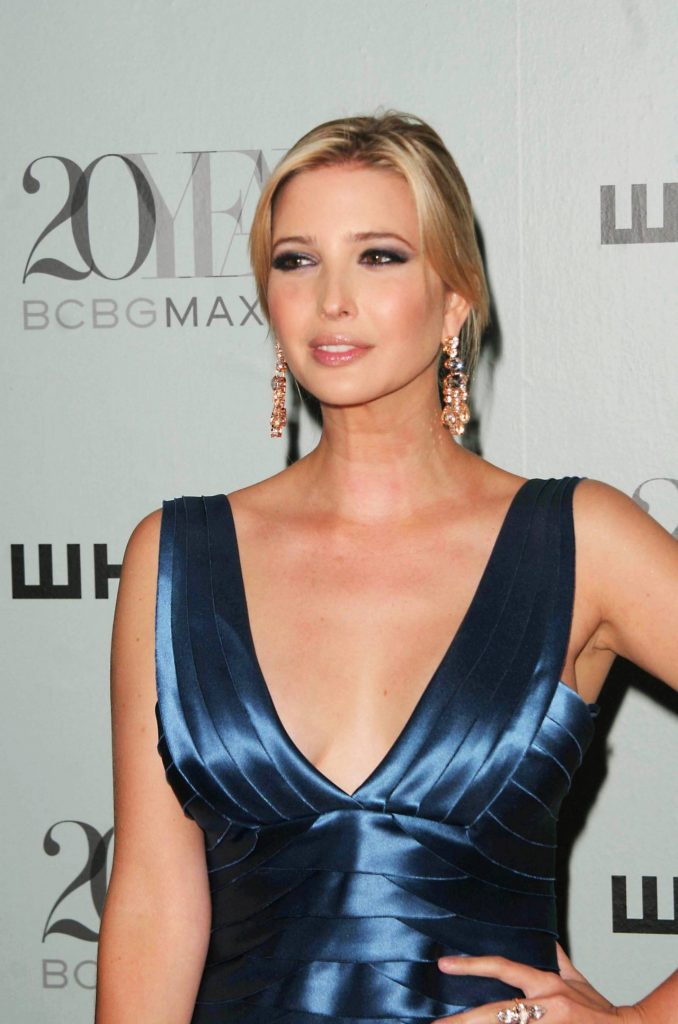 Ivanka has seemingly lost some weight evidenced by her sharp jawline and the curve of her cheek. With that long neck of hers, she can readily pull off any extravagant neck piece and manage to come on top with the fashion police.

In 2011, pregnancy didn’t affect this young, hard-working mother from dazzling her peers with her incredible style. Ivanka was pictured promoting her fashion brand which includes clothing, bags, shoes, and accessories with Nordstrom. 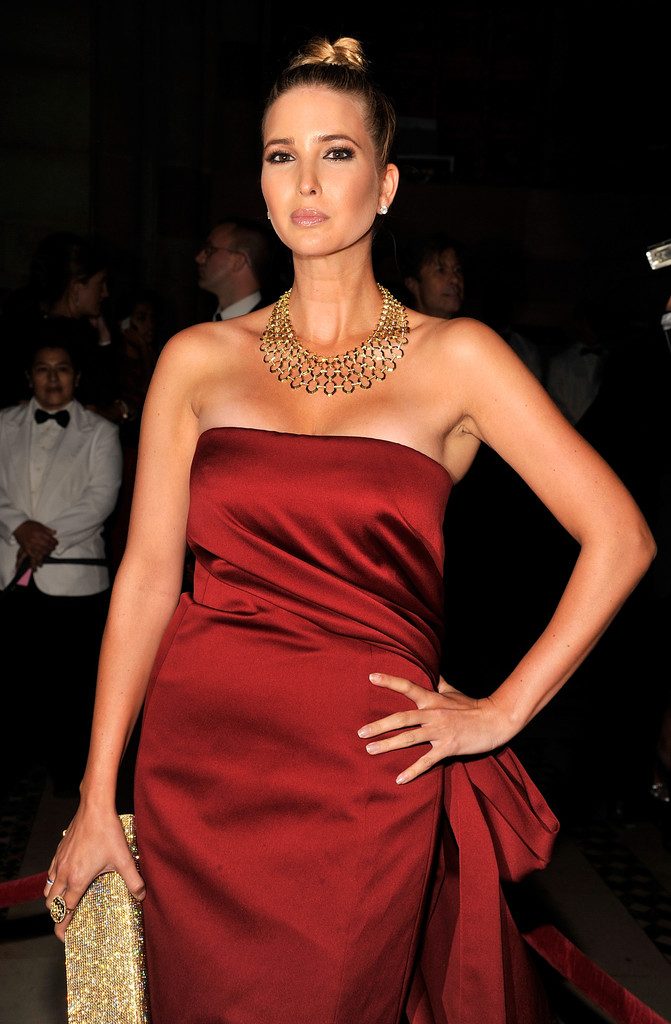 Wait. But what’s with those green eyes?? 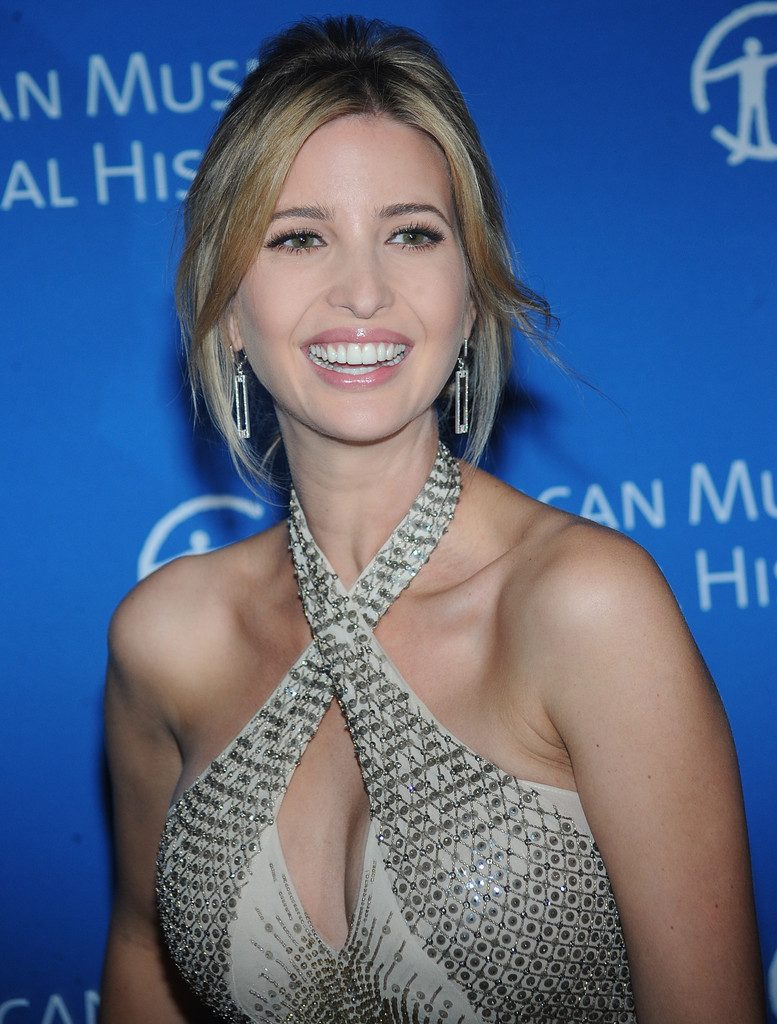 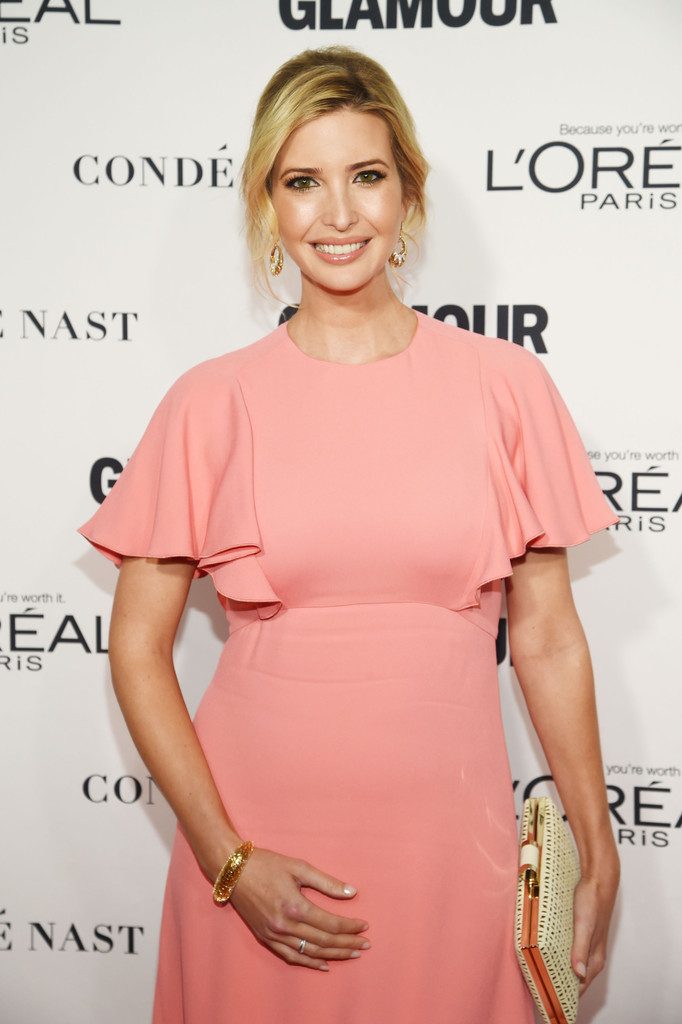 At age 34, there are no wrinkles to be found and her complexion sure looks smooth and perfect. Is it the charm of cosmetic enhancements like face fillers or a flawless skin routine?

Whatever it may be, we do hope to get our hands on that secret that Ivanka has. 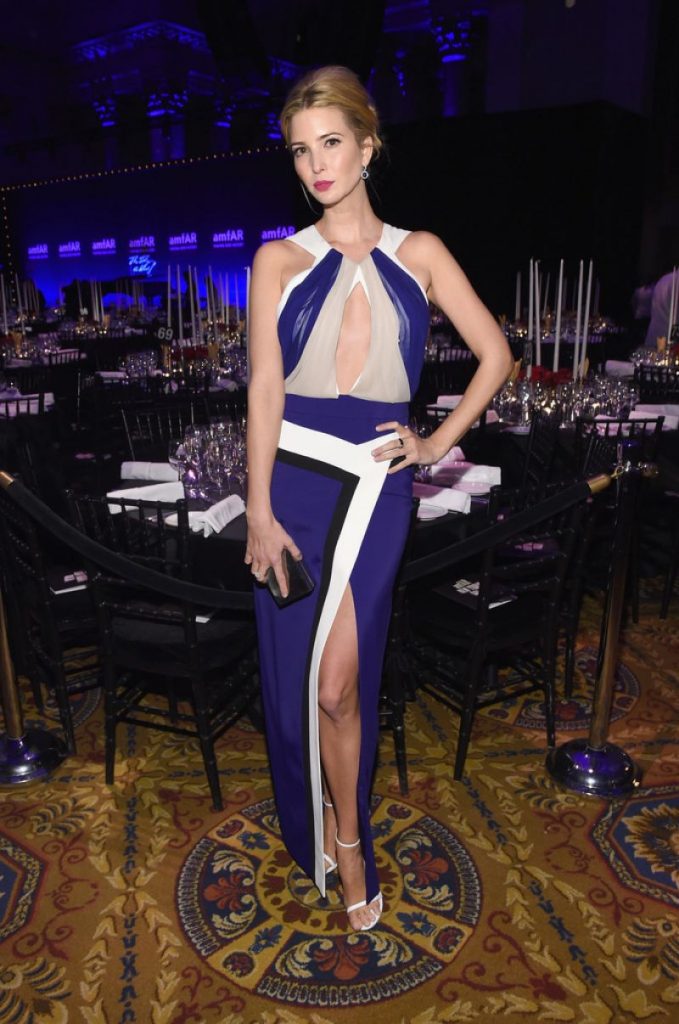 Appearing at the 2016 Met Gala held at the Metropolitan Museum of Art in New York, Ivanka Trump turned heads with her exceptionally sexy looks. 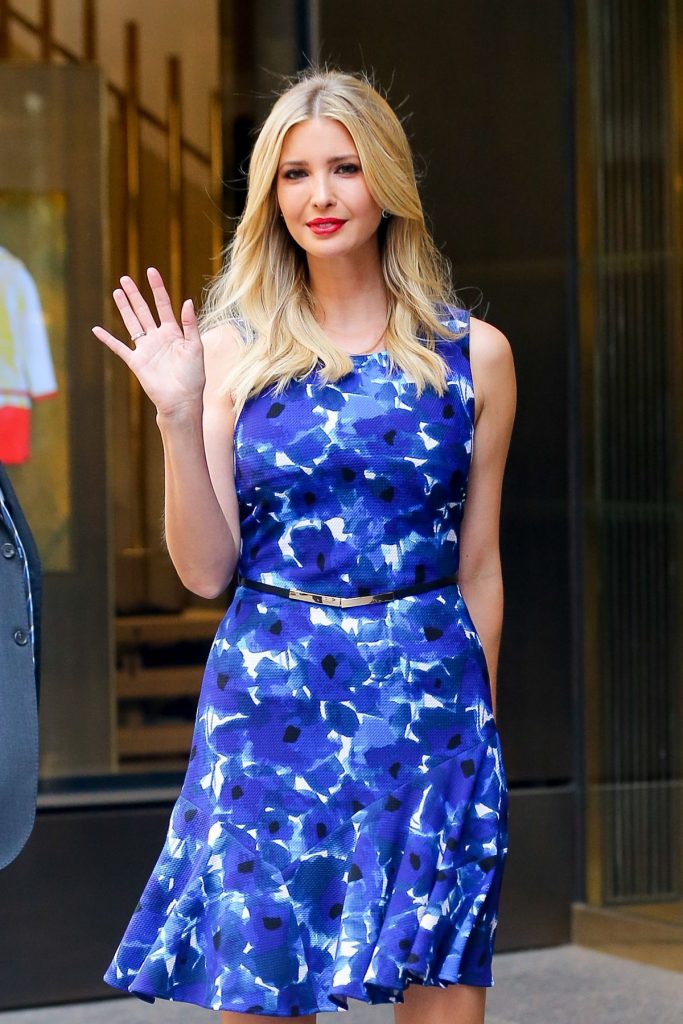 Her lovely hairdo and red-hot lips only made it better and hotter!!

Pictured in 2017, this photograph clearly displays her amazing curves and her fit body. 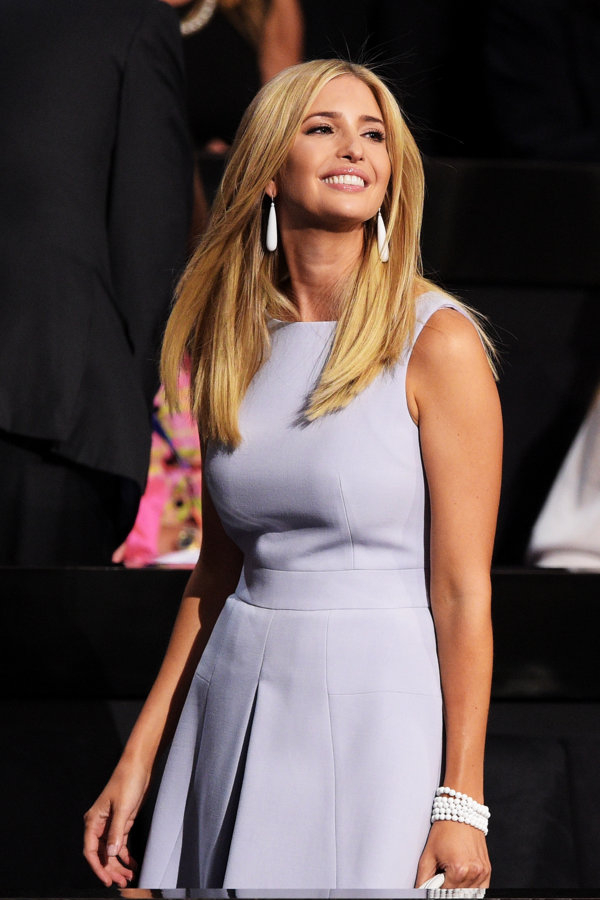 Her derriere drew attention with some claiming that she had a butt lift while others contemplated that she does have a naturally voluptuous body. Honestly, we can’t make up our mind yet on this one.

Acting as an advisor for President Trump, Ivanka has had a busy year, but that doesn’t seem to affect her amazing looks and impeccable fashion sense.

With no unnatural changes, could it be the work of good diet, killer workout routine or great genes? 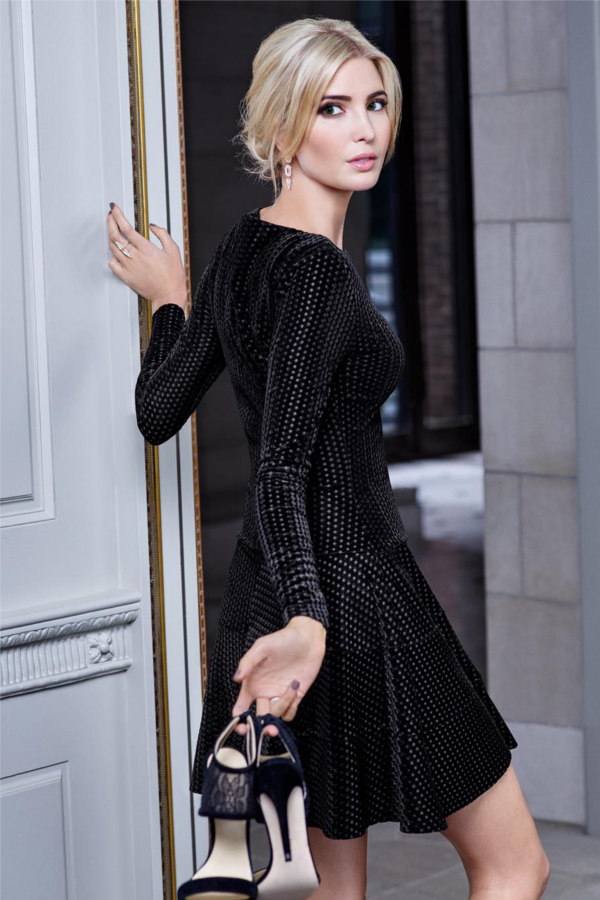 Ivanka Trump Before and After Plastic Surgery Photos

Ivanka has been the center of attention for many stories alleging possible cosmetic or augmentation surgery that she had to undertake to enhance her looks.

We will look into some ‘before and after’ photographs and closely observe them for clues that may provide us with the information if she has gone under the knife.

After some deep analyzing, here is what we uncovered.

Are Ivanka Trumps teeth the result of Dental Veneers? 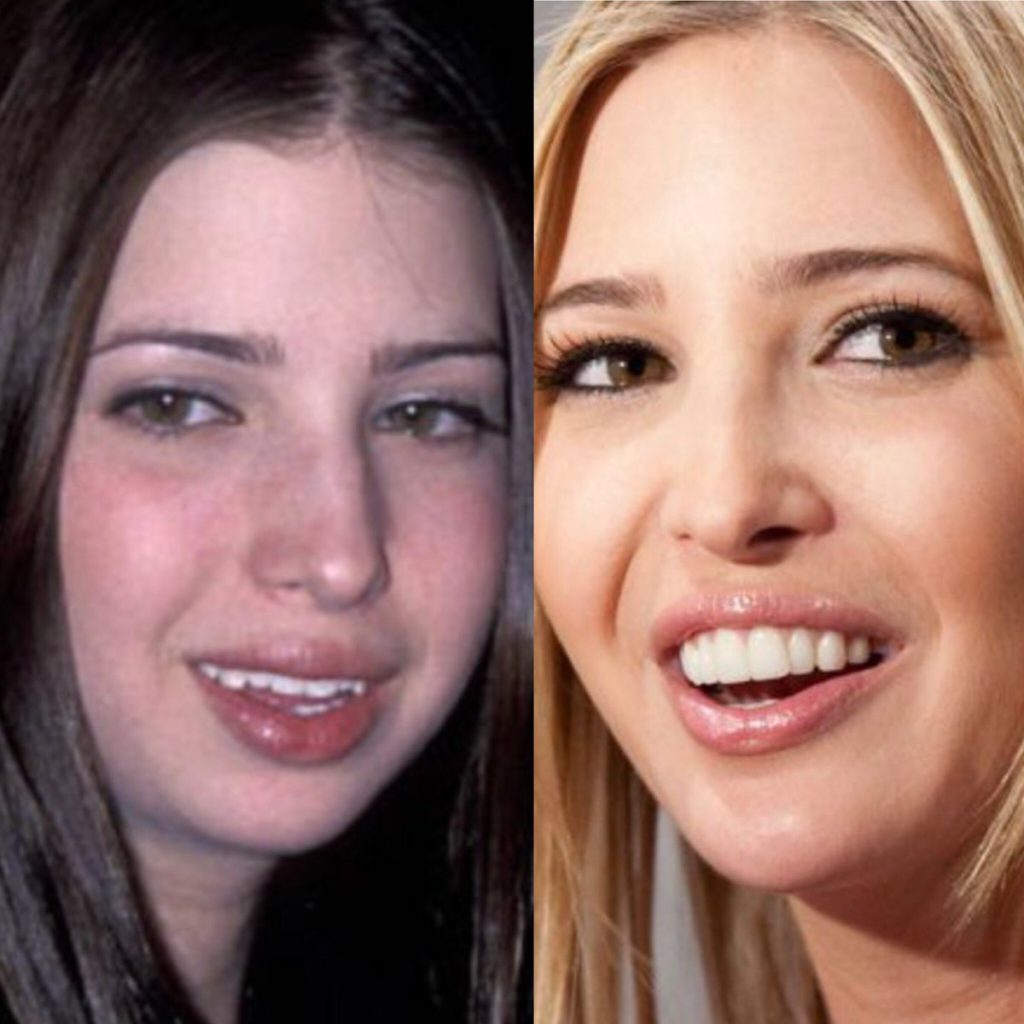 Growing up, Ivanka wore braces to alter her teeth alignment and reduce spaces between them. However, we do ascertain that it doesn’t align all the teeth on the same level.

With her braces removed later on in her teens, one can see that even though all her teeth were aligned without any gaps, they were not on the same level.

However, as an adult, we can see that all her teeth are perfectly in line and parallel toward the edges. This illustrates that Ivanka may have got fake ceramic Dental Veneers to augment her teeth shape and make it all straight-edged.

We do admit though that she does have an alluring smile now!! 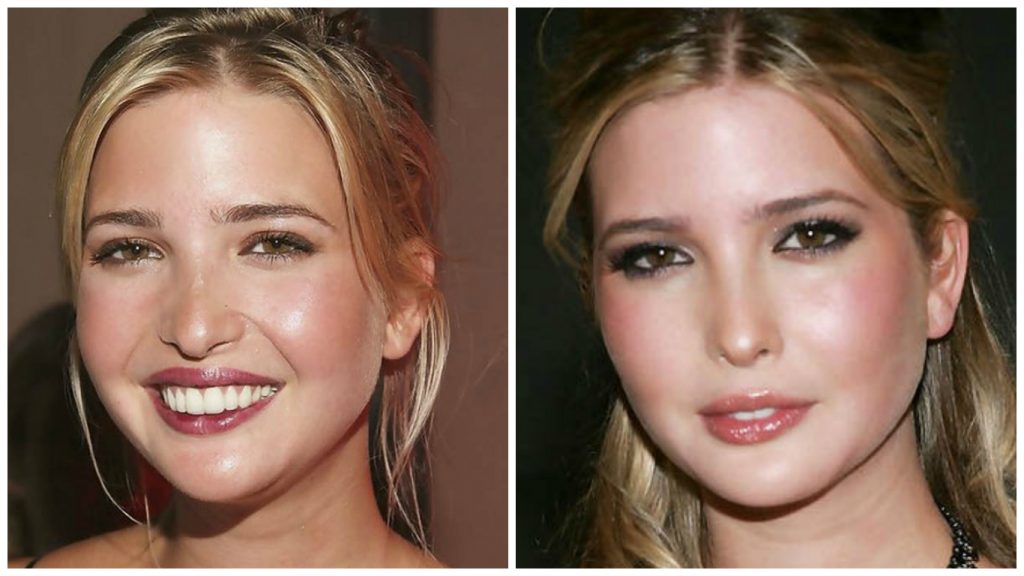 There has been a round of gossip regarding Ivanka’s nose stating that the young woman had undergone a rhinoplasty surgery to enhance her nose shape.

When you compare the above two pictures showing the alleged before and after surgery photos, it can be seen that her nose is quite big and has a prominent bulky nose bridge, along with a blunt tip.

Compared to the image on the right, you can see her nose appears to look smaller and has a narrow and thin bridge. Whether it was surgery or intricate contouring, we will let you be the judge. 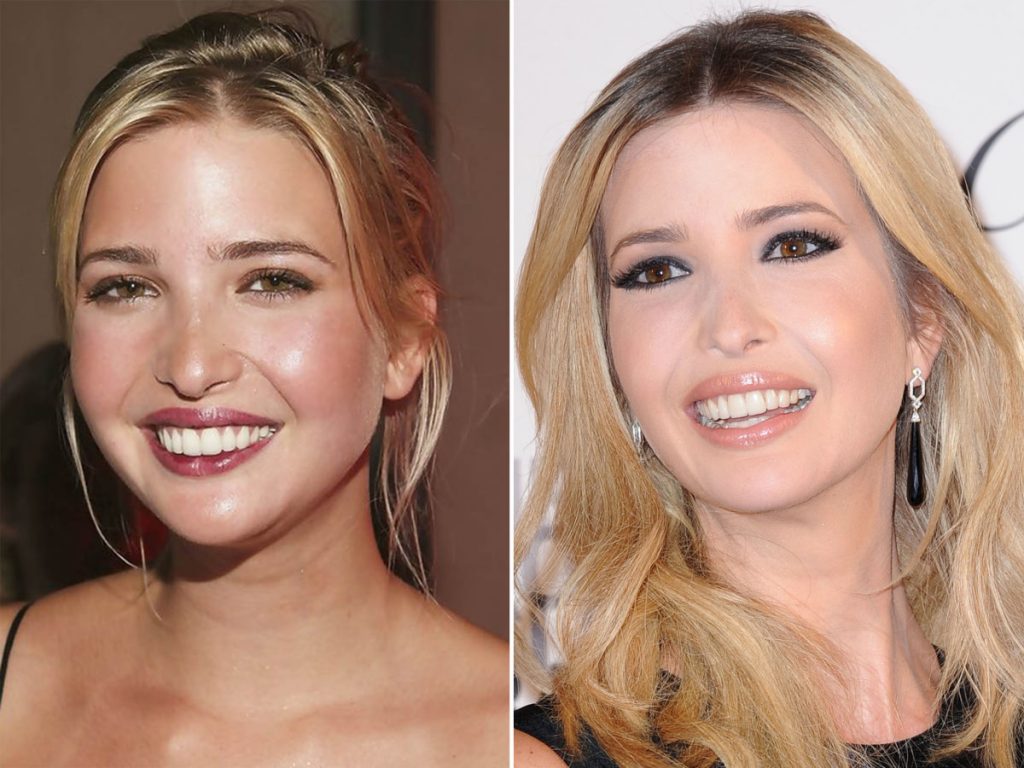 Ivanka is also rumored to have had a mentoplasty surgery that alters the shape of the chin.

Growing up as a teen, Ivanka lost her baby fat and her chin became more pointed and sharp. With many alleging that the celebrity had undergone a chin implant, we think otherwise, stating that Ivanka has had chin reduction surgery in order to match with her face anatomy and provide for a smooth outline.

Are Ivanka tits the result of Implants? 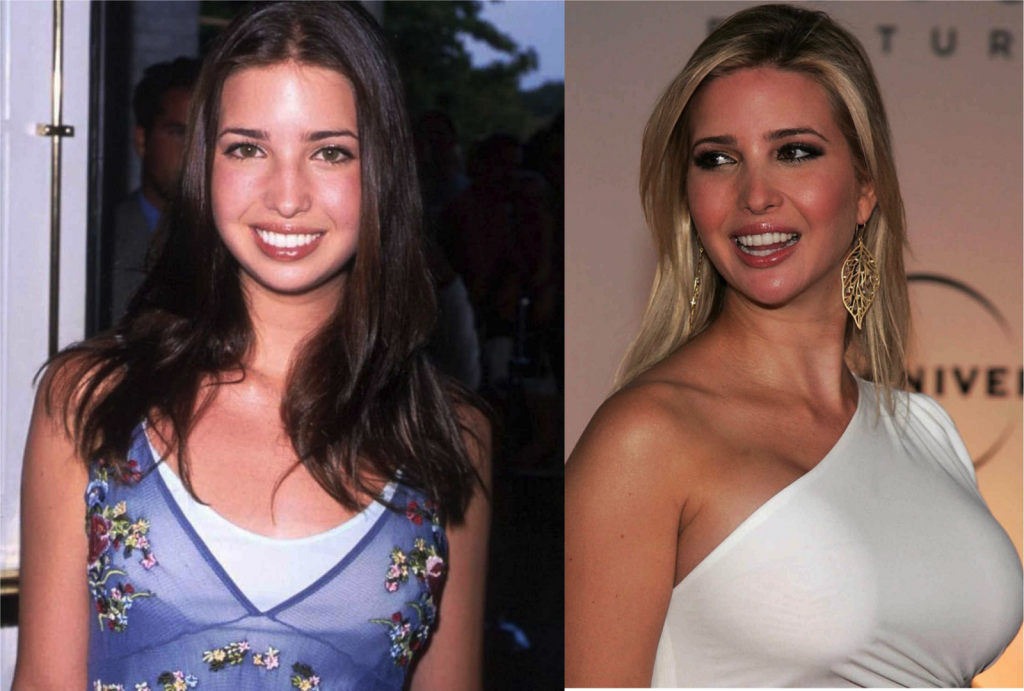 Another round of speculation to come about is regarding Ivanka’s breast size.

Seeing the picture above, one can definitely notice the changes in her upper body inciting claims that the model had definitely undergone breast augmentation procedure to enhance her boob size.

Has Ivanka undergone such a procedure?  It looks like it though. 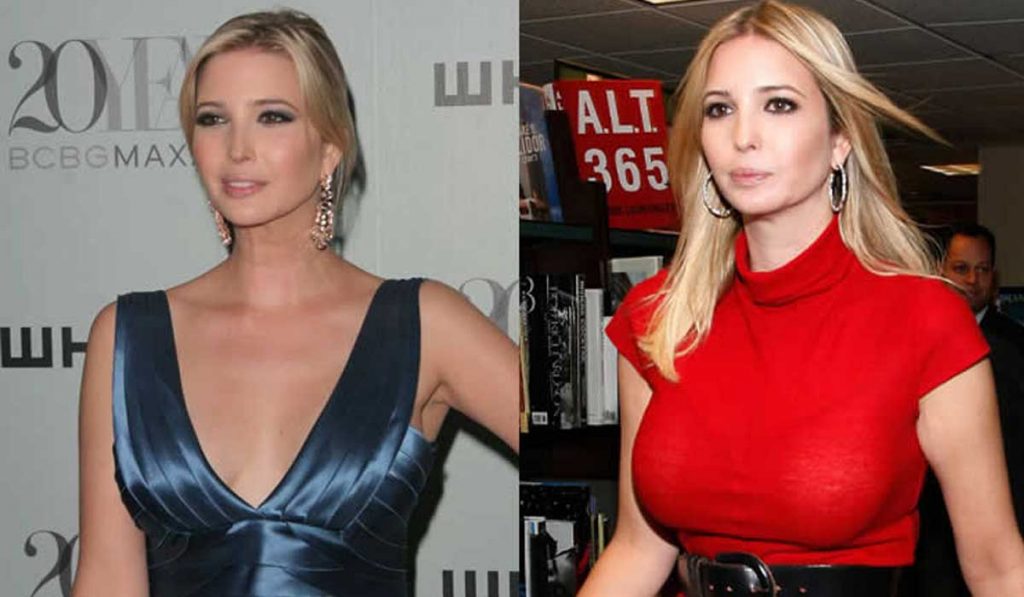 Dr. Dan Marsh, a very well-known consultant plastic surgeon, made the following statement to Express UK after reviewing the ‘before and after’ photos of Ivanka’s alleged surgery. He believes that the celebrity definitely had a rhinoplasty surgery to correct her nose structure which is made clear by a small surgery scar evident across the base of her nose.

He also states that Ivanka must have opted for dental veneers to get straight white teeth. Lastly, he concluded that Ivanka might be a perfect instance of cosmetic enhancement surgeries “done right”!

Her beautiful and elegant looks which, coupled with her polite and soft-spoken nature, have been winning accolades and bringing in fame for the celebrity. And though Ivanka has remained tight-lipped about the claims and chosen to not respond to the rumors, many women have been seeking to get plastic surgeries in order to look like her.

Dr. Franklin Rose, a Houston-based cosmetic surgeon declared in an ABC interview way back in 2016 that many clients of his had increasingly asked for the ‘Ivanka Trump” look.

It just wasn’t the case of Dr. Franklin rose, as in another interview, Dr. Norman Rowe claimed that 50 of his clients had been asking for the Ivanka look, which he defines as having wide cheekbones, thin nose, and big eyes.

He also stated that clients spend roughly around $30,000 and 40,000 to attain the Ivanka look with the use of temporary fillers and Botox treatment, while paying around $45,000 to 50,000 for a permanent Ivanka look which is achieved by cheek implants and nose surgery.

In terms of popularity of winning the coveted most sought-after celebrity face, Ivanka Trump even rivals the likes of Kylie Jenner!

Ivanka has grown over the years to immense importance being the first daughter and advisor to POTUS.

Her physical appearance has also remarkably changed for the better inciting widespread allegations and rumors that she had opted for cosmetic surgeries and procedures. As we take into consideration the photographs of the celebrity through her young and adulthood years, it may be a little difficult to ascertain what surgeries she had to enhance her looks.

However, we did notice certain evidence in some pictures which more or less suggest that the celebrity has gotten surgery to augment her physical appearance, most probably a nose surgery, boob enlargement, and a dental cosmetic procedure. However, we cannot vouch for our lives while saying this, as it’s still speculation, but arrived with good evidence. In case, if the surgeries are proved to be factual, we have to say that the results have been quite tremendous and Ivanka sure looks even more captivating and beautiful now!!

What do you guys think? Agree with us or disagree?