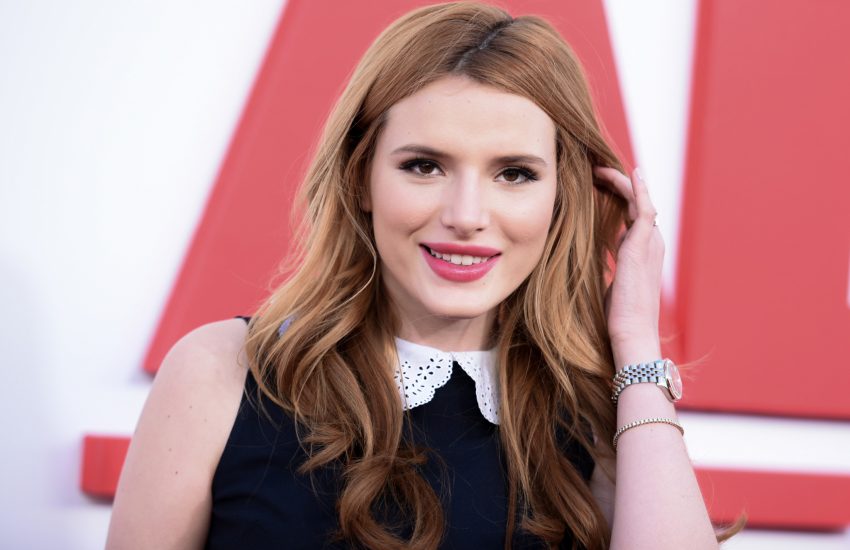 Annabelle Avery Thorne, commonly known as Bella Thorne, started her foray into Hollywood as a child model and a famous Disney star. Thanks to her stint in popular shows, being in the spotlight came easy for the rising star. The starlet knew how to turn heads with both her interesting movie roles and style quotient alike.

However, being exposed to the glitz and glamour of Hollywood since the ripe age of 6, Bella’s face and body features have been constantly brought into the public attention and has become quite the talk of the town.

With critics pointing out that the young teen had gone under the knife repeatedly to enhance her looks, fans are left wondering if it is true. But, ‘The DUFF’ actress has remained tight-lipped about the issue.

As stardom rose, fans began noting that their sweet child icon was turning into a controversial young starlet, opening a whole round of speculations and rumors on what is real or fake about her appearance.

Rumors regarding her breasts began to spread after a photograph of her holidaying with reality TV star Scott Disick released. With fans alleging that Bella had undergone breast implant surgery to impress her boyfriend, the young star became the focal point of celebrity gossips regarding plastic surgeries.

Apart from that, the 21-year-old actress has been rumored to have undergone numerous plastic surgeries involving cosmetic enhancements, butt injections, Botox and lip fillers, etc.

But even as numerous speculations whirl, Bella has chosen to remain silent on the issue and hasn’t admitted to anything.

Bella Thorne Biography – From “My Own Worst Enemy” to “Midnight Sun” 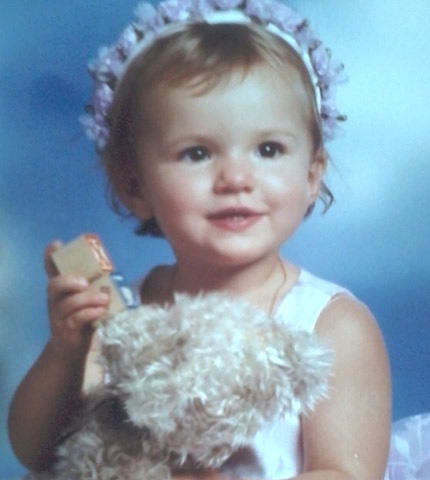 Born in Florida on 8th October 1997, Bella Thorne was a cute baby with prominent chubby cheeks. Looking at this picture, one can’t help but love the sweet smile and her cute fat cheeks. 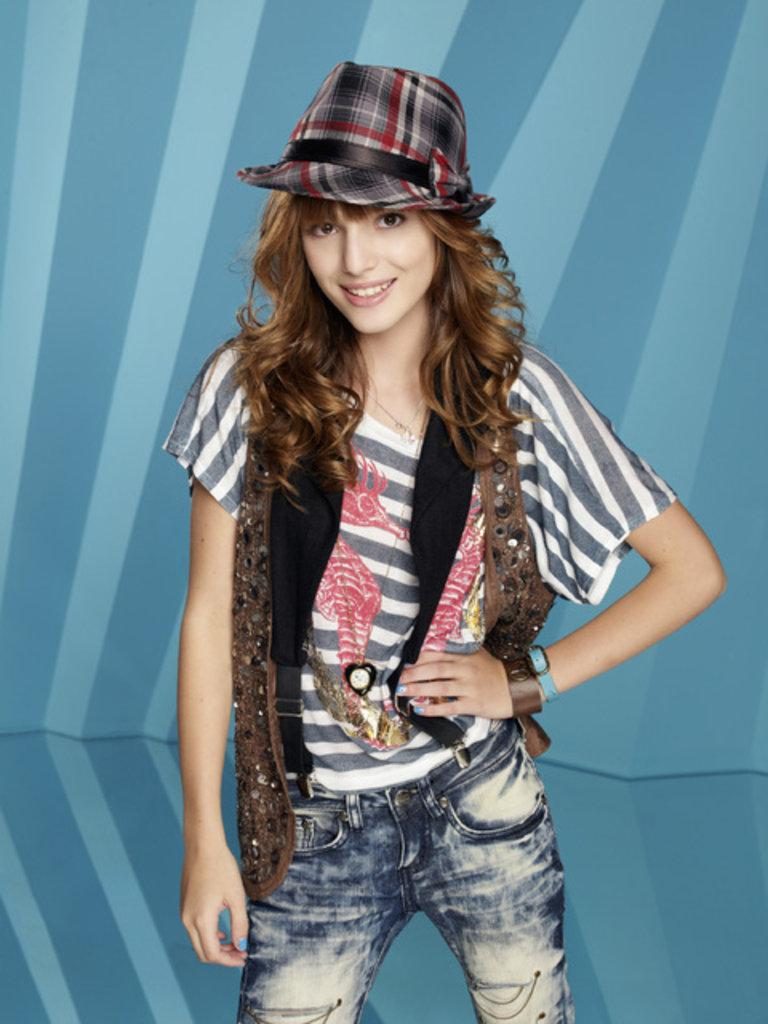 At age 10, Bella began her modeling career which comes as no surprise as the above picture clearly showcases a star in the making. The endearing smile along with her perfect teeth sure makes her a face for the camera, though her nose may seem a little bulgier to our liking. 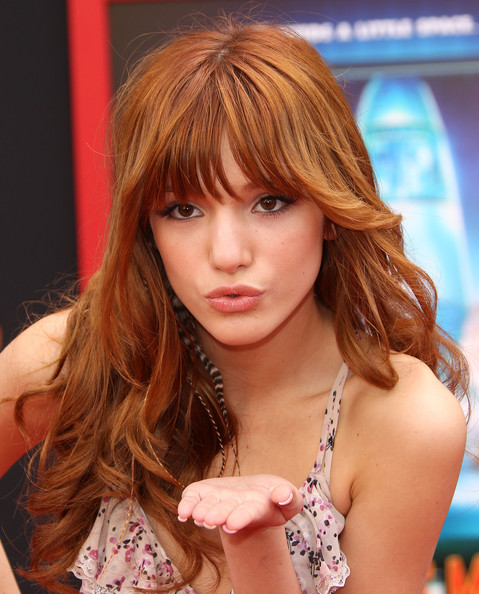 In her pre-teen years, Bella took up acting on the small screen. She featured in many television series like ‘My Own Worst Enemy’, the web series ‘Little Monk’, and an HBO show, ‘Big Love’. Her big break came through playing CeCe Jones on the Hit Disney series ‘Shake It Up’ which brought her quite the fame.

In the above picture, you can see the cute little star with her impeccable fashion sense. Who doesn’t love a statement ring and necklace that perfectly matches her long tresses and flowy dress? The girl got it right with the style department!! 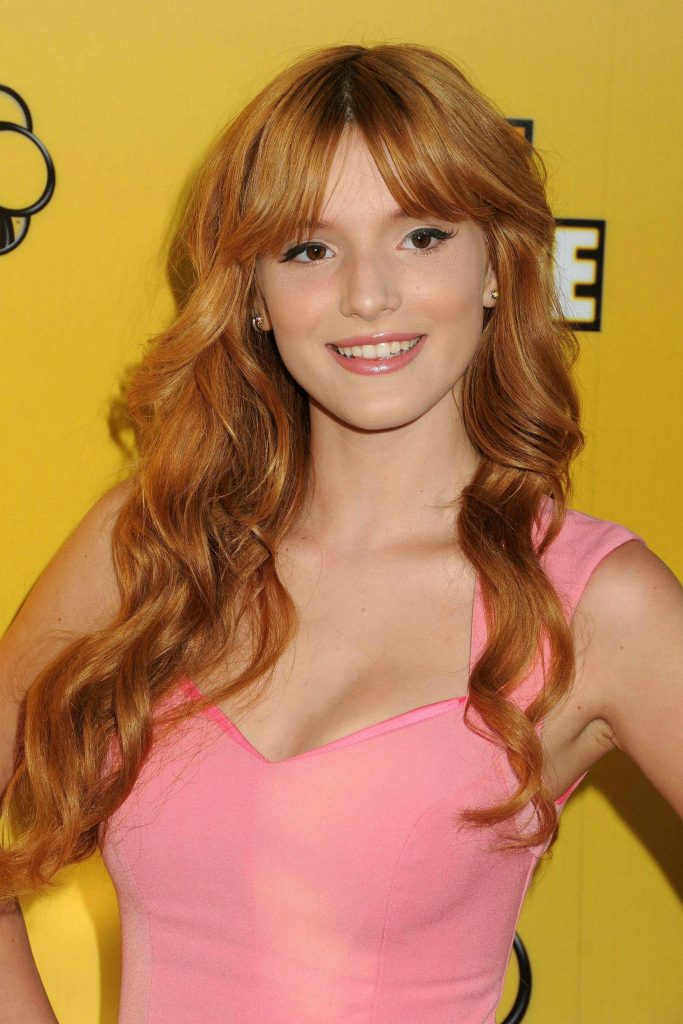 As her role in the hit Disney series continued, here is a picture of Bella a year later. Attending a TV event, it is easy to spot that she looks far more mature for someone her age. The make-up and hairdo are stunning, but was it a little overboard for a 14-year-old kid?  That’s TV biz I guess! However, we have to agree that the dark hue of hair perfectly complements her complexion and her twinkly eyes. But one can’t help but notice her pudgy nose. 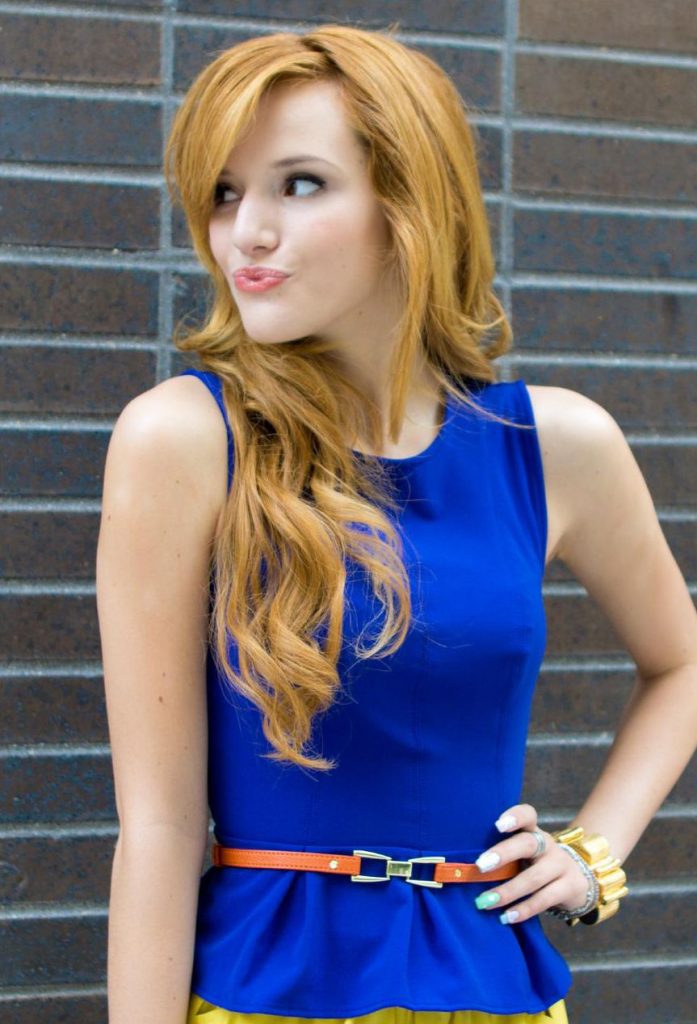 Here is a picture of Bella Thorne when she attended the premiere of the Disney movie ‘Brave’  in 2012. The subtle make-up and simple hair-do make for a very youthful look. 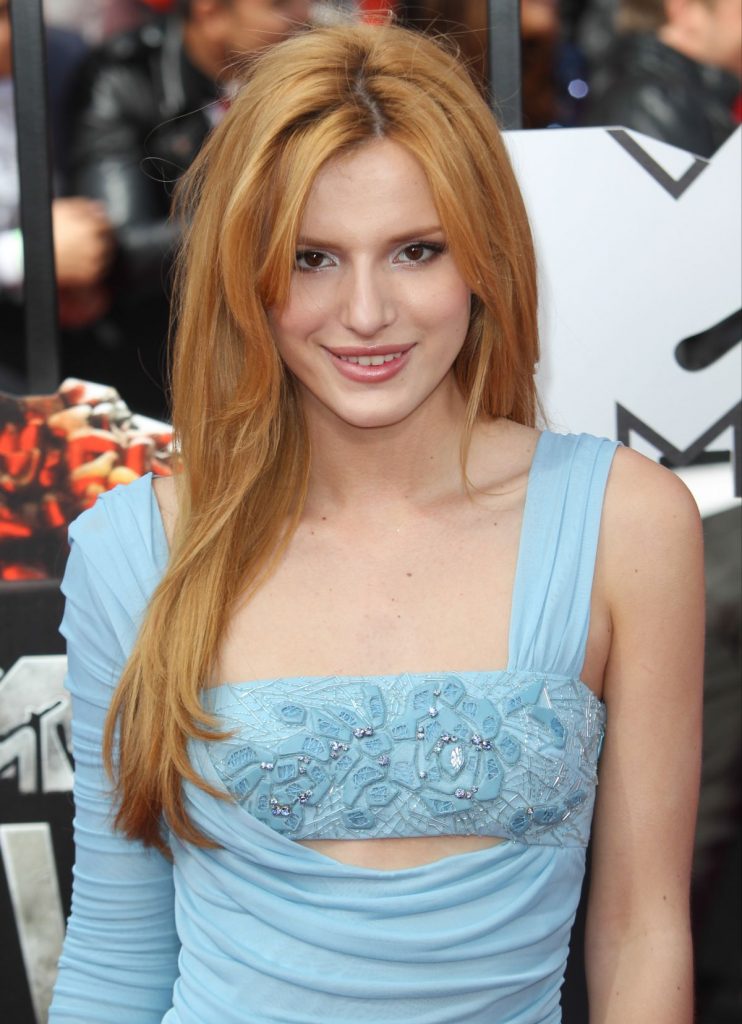 Acting on both the big screen and small screen, Bella was quite busy with her varied commitments. Her song TTYLXOX featured in the soundtrack of her TV show reached the Billboard Top 100. Her music career also kicked off after signing a record label and releasing an album. 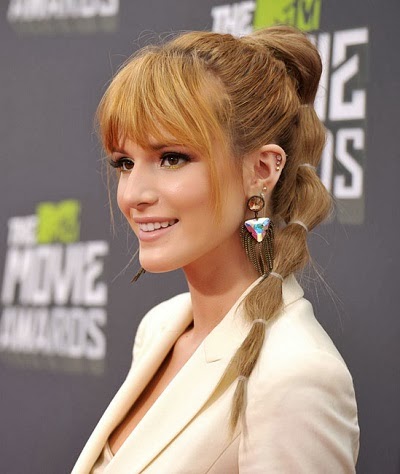 The following year, Bella Thorne made an appearance at the MTV movie awards. Unlike the previous photo, you can see that she has opted for a more fashionable and refined style of look with the beige color dress and ornamental earrings. The high ponytail and multiple ear piercings certainly complement her overall look. 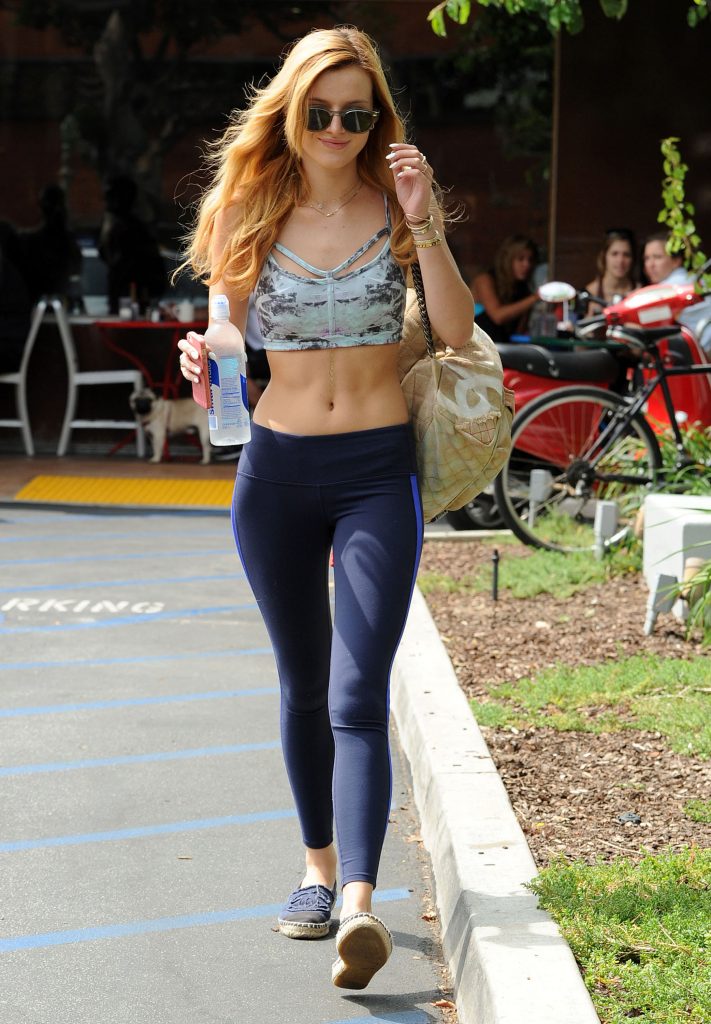 The 17-year-old was photographed stepping out of the gym. Her fit stature and slim waist can be seen as the outcomes of heavy workouts. We do note that the starlet has a flat chest, so there weren’t any rumors of a boob job yet. 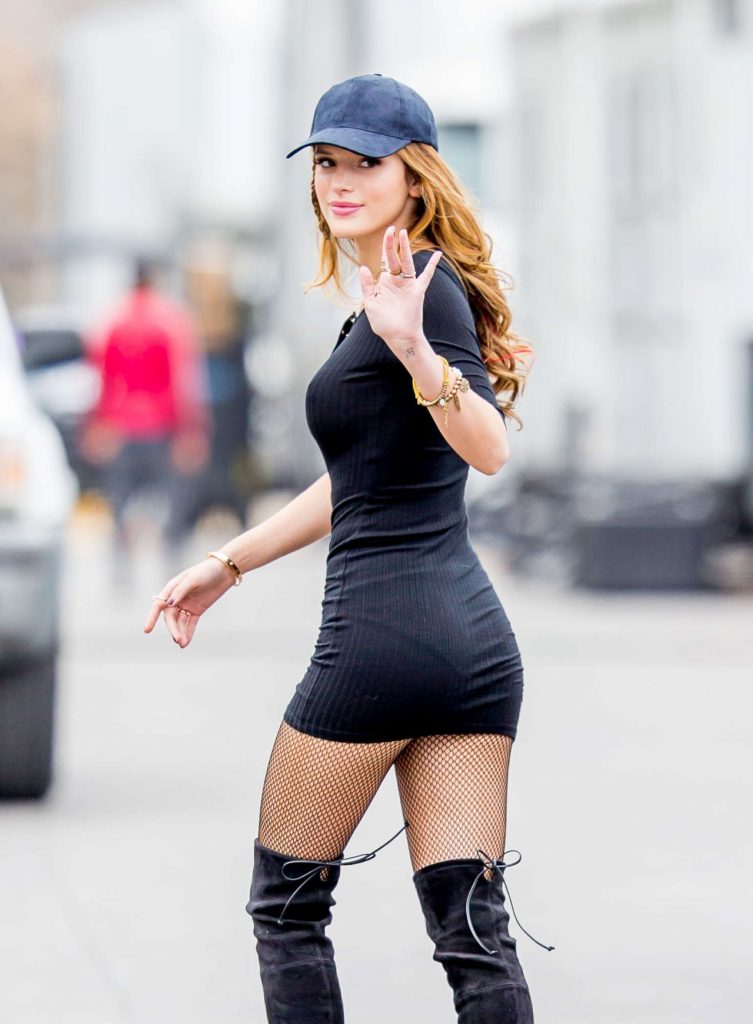 Attending the Elle event, Bella appeared to have fuller breast which was starkly different from her look last year. Was it implants or the magic of push-up bra? One may never know, but it was evident that the young star desired to look sexy and swerve away from her childhood image. This was also the time when Bella began pursuing more movie roles and acted in movies like Blended, The Duff, etc. 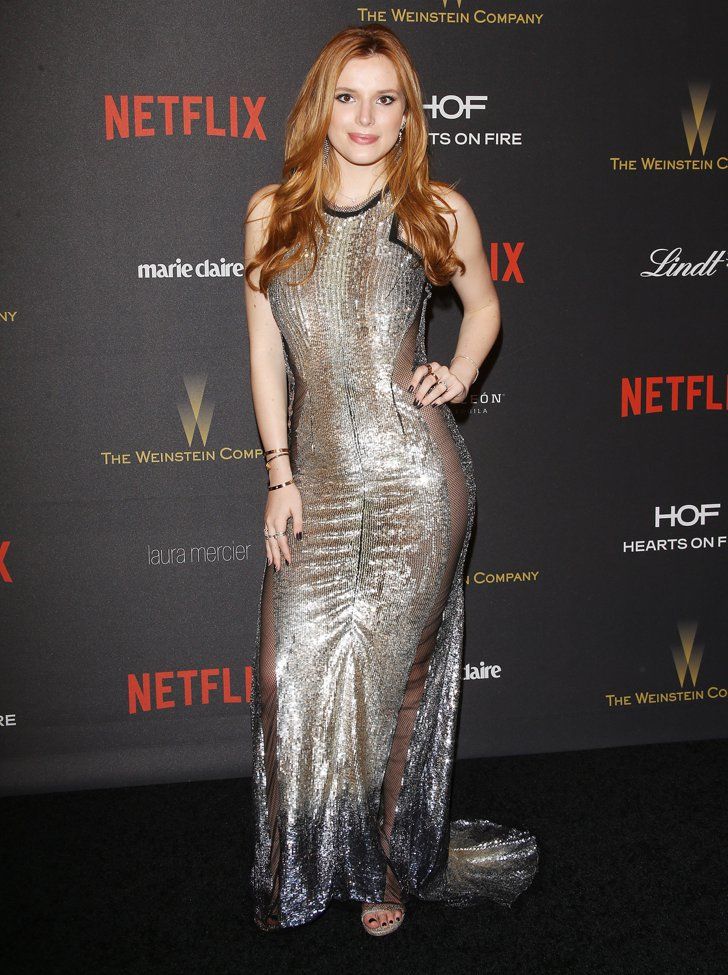 Attending the Netflix Golden Globes party, the starlet sure turned heads with her glamorous outfit that displayed her sexy curves. Notice the prominent derriere? It sparked allegations of butt enhancement surgery, which the actress denied. 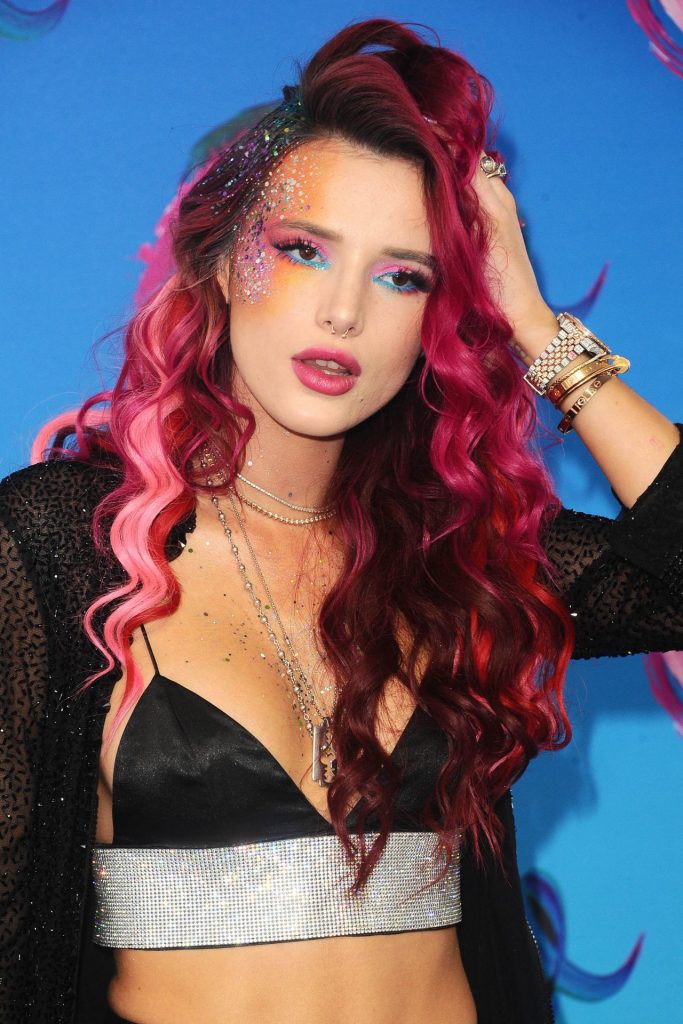 As Bella began to experiment with her looks, she dyed her hair a hot shade of pink and sported a nose ring which only accentuated the rumors suggesting a nose job and other augmentation surgeries. It also led to allegations that the star seemingly had lip injections to get those fuller-looking lips. 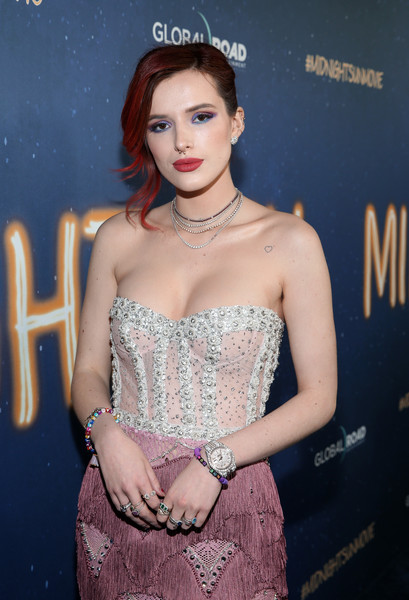 With her discreet heart tattoo on display, Bella dazzled at the Premiere of ‘Midnight Sun’. Many fans were quick to point out the visible changes in the star’s upper body stature. The form-fitting bejeweled outfit coupled with her hot red lips and hair sure set an image of an aspiring woman.

Bella Thorne Before & After Photographs

Running through Bella’s amazing transformation, one question beckons us – Did Bella go under the knife to look more fitting and land more projects in Hollywood?

Let us take a closer look at the photos of Bella Thorne before and after fame to spot the changes in the beautiful star.

Is there any truth to Bella Thorne boob job rumors? 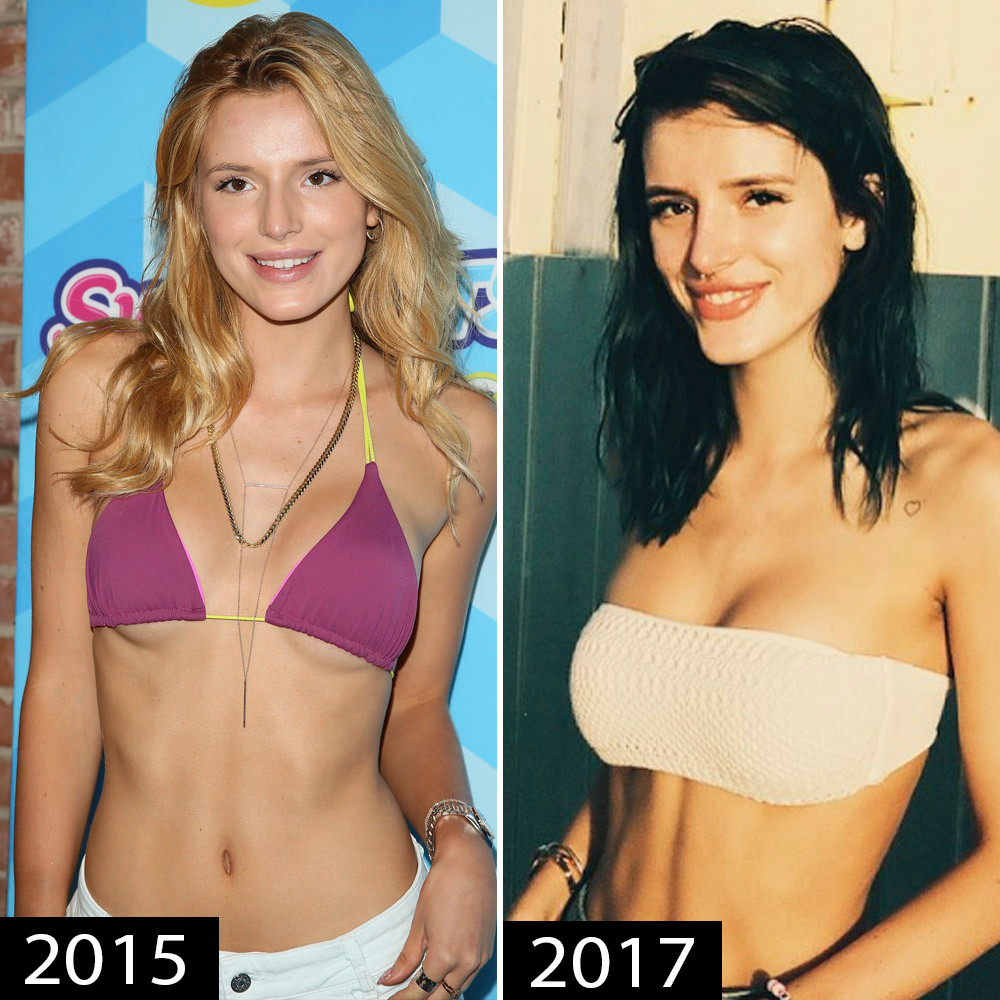 Rumors regarding Bella Thorne breast implants spread after the actress posted a photo on social media displaying a fuller chest.

Having had a flat chest since growing up, the sudden change in her drafted speculations from her fans and media alleging that the star underwent a breast augmentation surgery, which was only further fueled by her GQ nude photograph which again displayed a full breast.

Despite all that, the star commented that she had asked the magazine to not retouch her image and leave it as natural as possible. Though hard to comment, Bella Thorne fake boobs rumors seem to have never stopped.

One visible trait which Bella had carried from her young age was her long pudgy nose with a blunt tip. However, as we’ve seen, the later photos revealed the starlet sporting a thinner nose and a less visible tip.

The transformation is quite visible leaving fans to assume that the star had undergone rhinoplasty to alter her nose.

Though the star never confirmed, we doubt if make-up and contouring alone could do such a job! On the other end, if the rumors are supposedly true, with many cases of wrong nose jobs in Hollywood, the star is lucky to have come ‘unharmed’ as her nose does look pretty complementing her face now. 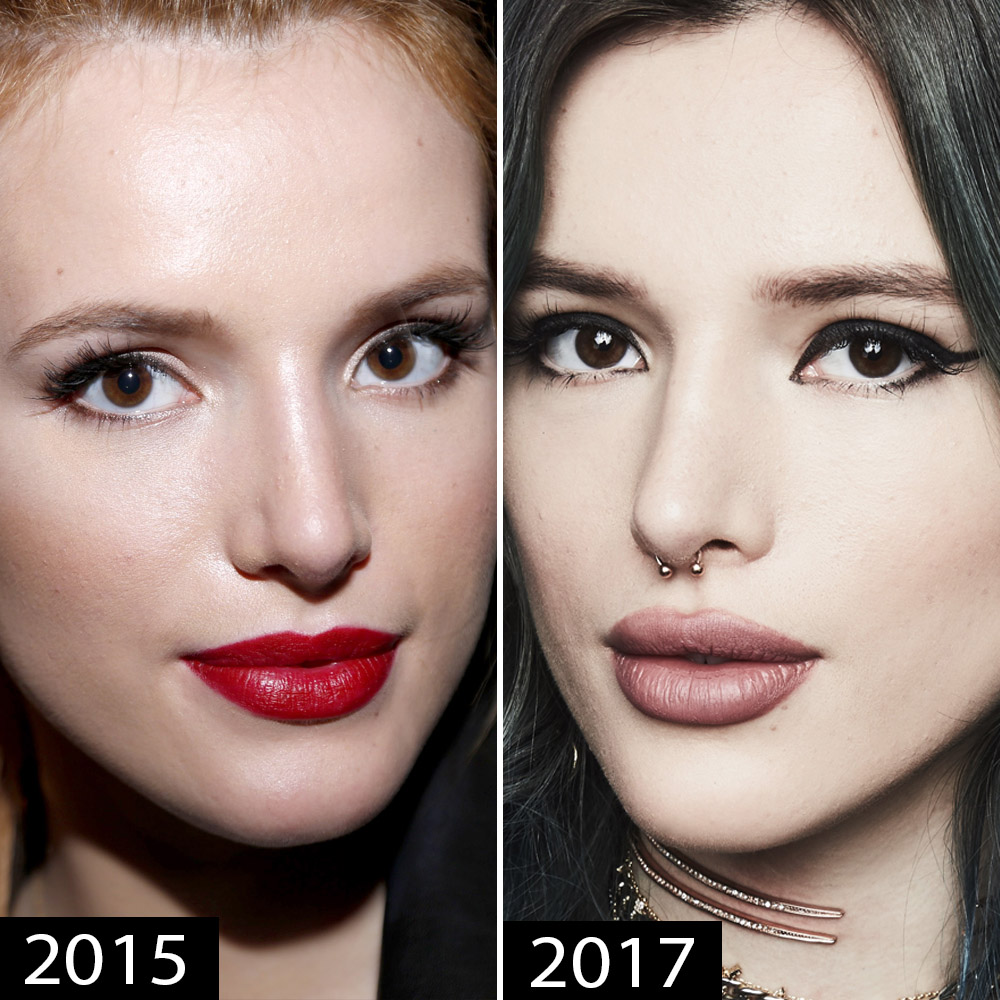 Looking at the above picture, it is quite obvious to note that Bella’s lips have undergone a major transformation from thin to fuller lips.

Dr. Gary Goldenberg, a celebrity surgeon proclaimed to the magazine ‘InTouch’ that the star without a doubt had definitely undergone one or the other lip procedures. He also informed that the shape of Bella’s lips was too big for the frame of her face.

Though we don’t know for sure if the starlet had lip injections, we are inclined to side with Goldenberg here as the procedures do seem to make her lips appear distorted! Don’t you think? 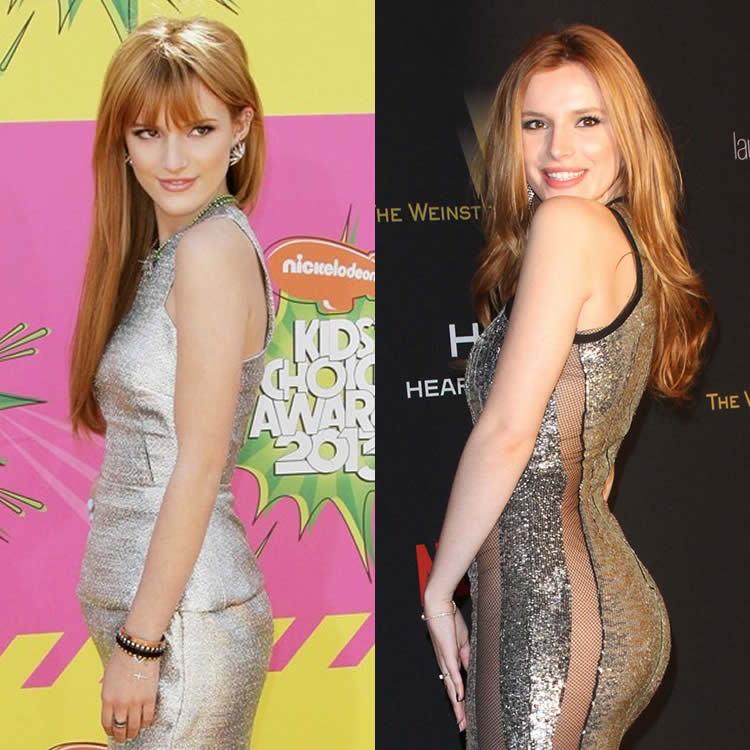 Though Bella chose to not respond to any of the earlier rumors, the only one that garnered a response from the starlet was regarding her butt augmentation rumor.

In a bid to put an end to fan speculation claiming that she had a Brazilian butt lift, Bella posted a video on YouTube showcasing her butt exercises which she states enhanced her butt. She also asserted that she wasn’t a fan of women who took to butt implants or surgeries to alter the size or form of their backside.

Do you think that exercise alone helped Bella attain this figure? One may never know. 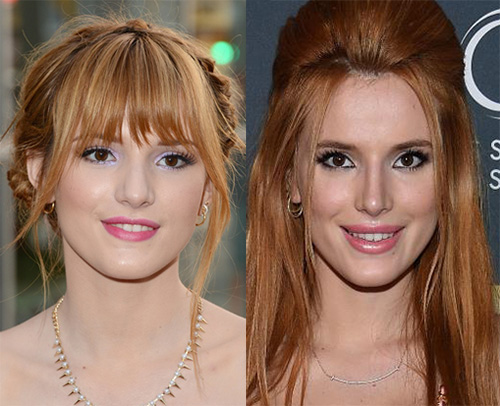 Bella’s eyes came under much public scrutiny after a video was posted that revealed her undergoing Microblading. The technique is slated to make eyebrows thicker and heighten the eye shape without the aid of make-up.

As seen from the picture, you can notice the significant change in her eyebrows from the thin and uneven shape to a more pronounced and thicker shape which are perfectly even with the other.

This started a trend of microblading as many of her social media followers readily took up the procedure.

Bella Thorne is quite outspoken and popular on social media but has chosen to remain silent on the countless Bella Thorne surgery rumors and allegations. However, many of her fans are taking her silence on the issue as confirmation that the star did undergo breast, butt or other cosmetic surgeries to enhance her body stature and looks.

A cosmetic surgeon claims that the young star had definitely undergone rhinoplasty by looking at her past and present photographs which show an obvious transformation in her facial features.

The rumors also stem from the fact that Bella Thorne has herself admitted that she has a lot of insecurities about the imperfections in her body despite her stint as a successful child actress and model.

Have her insecurities, coupled with the glamorous Hollywood lifestyle, pushed Bella to undergo several cosmetic surgeries at such a tender age? Even if so, can it be justified? Though fans feel differently, it is truly her choice.

Given the star’s silence, we can only wish her good luck and hope for her continued success in Hollywood.